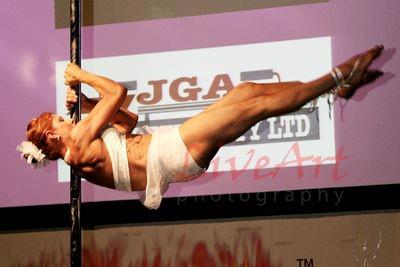 It is so wonderful to see this year an abundance of pole competitions both fitness and showgirl based to choose from! For instructors and students from a wide variety of pole and aerial schools the choice has never been greater. Pole fitness has now also become common in mainstream fitness and bodybuilding competitions thanks to Shemoves director and co-founder, Britt Bailey.

Way back in 2006 when Shemoves was only 2 years young, Britt made the courageous decision to compete in a mainstream fitness competition using her X-Stage X-Pole to demonstrate her strength, stamina and flexibility. No one else in Australia had used a pole routine in a mainstream bodybuilding or fitness event ever before. Britt's routine was well received and went a long way to shattering the stigma of pole fitness and it's benefits to a hardcore fitness audience.

Although Britt has retired from competitions, she regularly mentors and creates routines for students wishing to perform or compete in mainstream and pole fitness.

Listen to your parents

WANT TO BE KEPT UP TO DATE WITH WHAT 'SHE'S GOT ON'?